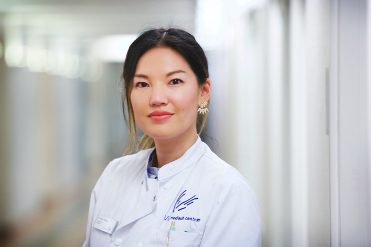 Kak Khee Yeung was born 8 February 1984 in the Netherlands. She is raised by ‘traditional’ Chinese parents who moved to the Netherlands in the 70s. She is a vascular surgeon in Amsterdam UMC on both locations VU medical center and AMC. Her area of expertise is complex endovascular aortic surgery. She is also the principal investigator of translational vascular surgery.

She studied Medicine at the Vrije Universiteit (VU) in Amsterdam, the Netherlands. During her first year she was already involved in research activities under supervision of Prof. Dr. Willem Wisselink at the Vascular Surgery department. She continued to perform research during her study at the University. In the beginning of 2013 she graduated from her PhD-studies on advanced diagnosis and therapy of Juxtarenal aortic aneurysms. During her residency Surgery in 2011, she was also coordinating all the clinical and preclinical research in the Vascular Surgery department. For her vascular surgery fellowships training she went to Albany Medical Center, New York US and to Chang Gung Memorial Hospital, Taipei, Taiwan. She finished her residency and fellowship in Vascular Surgery in VU medical center, Amsterdam, the Netherlands in 2017. Meanwhile, she became the Principal investigator in the research lines since 2013: 1) Aortic aneurysms: the pathophysiology, genetic factors, imaging (artificial intelligence) and updates in treatment. 2) Aortic occlusive diseases: treatment with microbubbles and updates in drug eluting balloons; while guiding 16 PhD.-students, technician and postdocs. She has built a vascular surgery laboratory in Amsterdam UMC and national biobank with over 700 vascular tissues and live vascular cells. With the latter, 3D-vascular models can be developed to study the pathophysiology in order to predict disease progression and to identify new potential medical targets for personalized medicine. She has received multiple international and national grants supporting her studies. She was awarded by the Dutch Heart Foundation with the Dekkerbeurs Senior Clinical Scientist and was granted with over 13 research awards and published now over 80 high impact peer-reviewed articles. She is the associate editor of the Journal of Endovascular Therapy. She has a close collaboration with the University of Stanford, Stanford, USA, University of Porto, Porto, Portugal, Changhai hospital, Shanghai, China and University of L. Blaga, Romania.

She speaks Dutch, English and Chinese. She dances ballet and plays piano in her free time.

Please email Louise King (louise.king@nds.ox.ac.uk) if you would like to attend.