'Rare events - unavoidable challenges and lessons to be learned'

Treating rare diseases raise the challenge of minimal previous exposure to similar operations. Defining a learning curve is therefore controversial as many such 'events' seem to occur in clusters. Similarly, rare complications might occur in 'clusters' hence the response to rare/never events should be interpreted with caution. 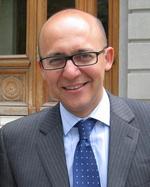 After obtaining a PhD from Bristol University, Mr Radu Mihai trained in the South West Region before coming to Oxford as a SpR and subsequently as a Fellow in Endocrine Surgery. He was appointed Consultant in 2007 and in the last eight years has contributed to the development of this subspecialty in Oxford though a constant involvement in clinical research and by his activities within the Executive Committee of the British and European Society of Endocrine Surgeons. Mr Mihai is also Honorary Senior Clinical Lecturer at the Nuffield Department of Surgical Sciences.