Neurosurgeons from the Nuffield Department of Surgical Sciences are set to feature in a BBC documentary called 'How the NHS Changed our World: The John Radcliffe'.

The documentary will air this month on BBC One and BBC Two to coincide with the 70th anniversary of the founding of the NHS and will celebrate the life-changing work of our health service.

Looking at the impact the University of Oxford, the Radcliffe Infirmary and the John Radcliffe Hospital have had in the area of neuroscience, the programme focuses on the formation of Oxford Functional Neurosurgery at NDS, which Professor Tipu Aziz founded in 1993, and the work he has done with his team and continue to do with deep brain stimulation and electrical implants. 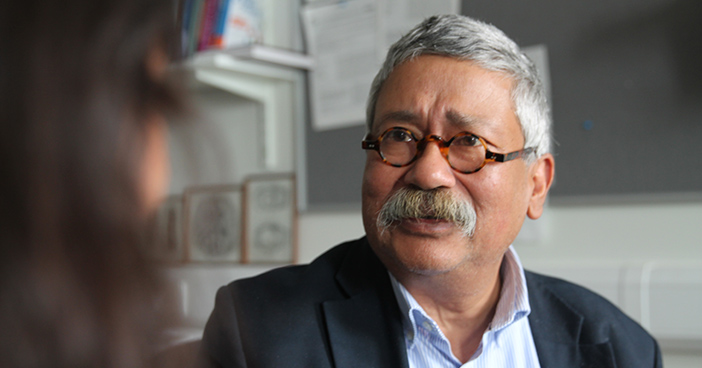 A film crew followed Professor Aziz and his team, including Mr James FitzGerald (pictured below) and Professor Alex Green, to show how their revolutionary surgery can offer hope to some patients battling the life-limiting tremors of Parkinson’s and help others walk again after years of constant pain.

Presented by Professor Aarti Jagannath from the Nuffield Department of Clinical Neurosciences, the programme also explores the 300 year old ties between the University of Oxford and the John Radcliffe Hospital, and reveals how pioneering research is now making mind control a reality.

'How the NHS Changed our World: The John Radcliffe' airs on:

The programme will be available on BBC iPlayer shortly after broadcast.

John Radcliffe to feature in BBC documentary
The Oxford Times, 20/06/2018

The NHS celebrates 70 years with a series of special TV programmes this month
Mirro, 23/06/2018

Congratulations to the winners of the NDS Staff Awards 2022

On 16 June, the winners of the 2022 NDS Staff Awards were announced at a departmental summer BBQ at the Cherwell Boathouse in Oxford.

Varicose veins are a very common manifestation of chronic venous disease, affecting over 30% of the population in Western countries. In America, chronic venous disease affects over 11 million men and 22 million women aged 40–80 years old. Left untreated it can escalate to multiple health complications including leg ulcers and ultimately amputations. A new international study by Oxford researchers published on 2 June 2022 in Nature Communications establishes for the first time, a critical genetic risk score to predict the likelihood of patients suffering with varicose veins to require surgery, as well as pointing the way towards potential new therapies.

New reporting guidelines, jointly published in Nature Medicine and the BMJ by Oxford researchers, will ensure that early studies on using Artificial Intelligence (AI) to treat real patients will give researchers the information needed to develop AI systems safely and effectively.