The long-standing dream of using Artificial Intelligence (AI) to build an artificial brain has taken a significant step forward, as a team led by Professor Newton Howard from the University of Oxford has successfully prototyped a nanoscale, AI-powered, artificial brain in the form factor of a high-bandwidth neural implant.

In collaboration with INTENT LTD, Qualcomm Corporation, Intel Corporation, Georgetown University and the Brain Sciences Foundation, Professor Howard’s Oxford Computational Neuroscience Lab in the Nuffield Department of Surgical Sciences has developed the proprietary algorithms and the optoelectronics required for the device. Rodents’ testing is on target to begin very soon.

This achievement caps over a decade of research by Professor Howard at MIT’s Synthetic Intelligence Lab and the University of Oxford, work that resulted in several issued US patents on the technologies and algorithms that power the device, the Fundamental Code Unit of the Brain (FCU), the Brain Code (BC) and the Biological Co-Processor (BCP) are the latest advanced foundations for any eventual merger between biological intelligence and human intelligence. Ni2o (pronounced “Nitoo”) is the entity that Professor Howard licensed to further develop, market and promote these technologies.

The Biological Co-Processor is unique in that it uses advanced nanotechnology, optogenetics and deep machine learning to intelligently map internal events, such as neural spiking activity, to external physiological, linguistic and behavioral expression. The implant contains over a million carbon nanotubes, each of which is 10,000 times smaller than the width of a human hair.  Carbon nanotubes provide a natural, high-bandwidth interface as they conduct heat, light and electricity instantaneously updating the neural laces. They adhere to neuronal constructs and even promote neural growth. Qualcomm team leader Rudy Beraha commented, 'Although the prototype unit shown today is tethered to external power, a commercial Brain Co-Processor unit will be wireless and inductively powered, enabling it to be administered with a minimally-invasive procedures.' 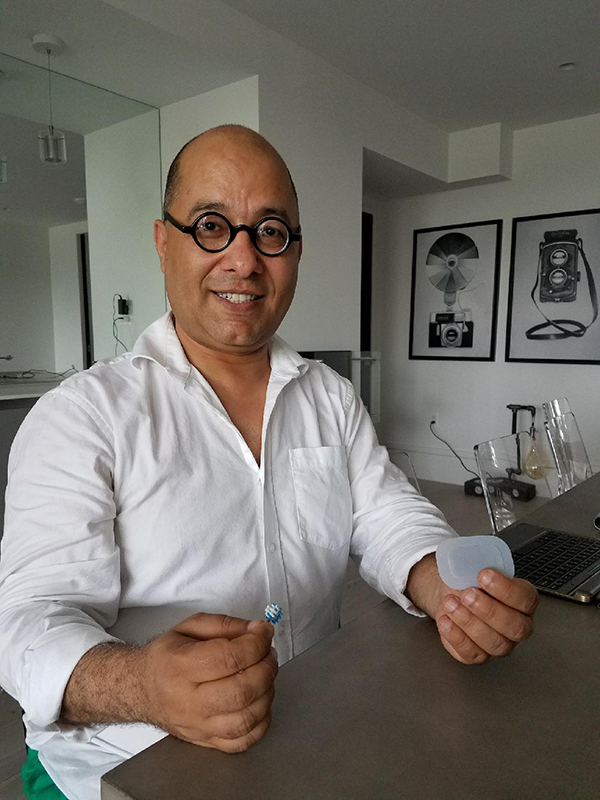 The device uses a combination of methods to write to the brain, including pulsed electricity, light and various molecules that simulate or inhibit the activation of specific neuronal groups. These can be targeted to stimulate a desired response, such as releasing chemicals in patients suffering from a neurological disorder or imbalance. The BCP is designed as a fully integrated system to use the brain’s own internal systems and chemistries to pattern and mimic healthy brain behavior, an approach that stands in stark contrast to the current state of the art, which is to simply apply mild electrocution to problematic regions of the brain.

The Biological Co-Processor promises to provide relief for millions of patients suffering from neurological, psychiatric and psychological disorders as well as degenerative diseases.  Initial therapeutic uses will likely be for patients with traumatic brain injuries and neurodegenerative disorders, such as Alzheimer’s, as the BCP will strengthen the weak, shortening connections responsible for lost memories and skills. Once implanted, the device provides a closed-loop, self-learning platform able to both determine and administer the perfect balance of pharmaceutical, electroceutical, genomeceutical and optoceutical therapies.

Dr Richard Wirt, a Senior Fellow at Intel Corporation and Co-Founder of INTENT, the company’s partner of Ni2o bringing BCP to market, commented on the device, saying, 'In the immediate timeframe, this device will have many benefits for researchers, as it could be used to replicate an entire brain image, synchronously mapping internal and external expressions of human response. Over the long term, the potential therapeutic benefits are unlimited.'

The brain controls all organs and systems in the body, so the cure to nearly every disease resides there. - Professor Newton Howard

Rather than simply disrupting neural circuits, the machine learning systems within the BCP are designed to interpret these signals and intelligently read and write to the surrounding neurons. These capabilities could be used to reestablish any degenerative or trauma-induced damage and perhaps write these memories and skills to other, healthier areas of the brain.

One day, these capabilities could also be used in healthy patients to radically augment human ability and proactively improve health.  As Professor Howard points out: 'The brain controls all organs and systems in the body, so the cure to nearly every disease resides there.'  Speaking more broadly, Professor Howard sees the merging of man with machine as our inevitable destiny, claiming it to be 'the next step on the blueprint that the author of it all built into our natural architecture.'

With the resurgence of neuroscience and AI enhancingmachine learning, there has been renewed interest in brain implants. This past March, Elon Musk and Bryan Johnson independently announced that they are focusing and investing in for the brain/computer interface domain.

When asked about these new competitors, Professor Howard said he is happy to see all these new startups and established names getting into the field - he only wonders what took them so long, stating: 'I would like to see us all working together, as we have already established a mathematical foundation and software framework to solve so many of the challenges they will be facing. We could all get there faster if we could work together - after all, the patient is the priority.'

A trial investigating how effective endocrine treatment is, prior to surgery in post-menopausal women with breast cancer, has randomised its first patient of the year.

A new systematic review from Cochrane ENT at the Nuffield Department of Surgical Sciences says antihistamines are likely to reduce the risk of developing motion sickness (travel sickness) in susceptible adults under naturally occurring conditions of movement, but they may be more likely to cause drowsiness than placebo.

A new documentary film launched by the Diabetes Research and Wellness Foundation (DRWF) on World Diabetes Day 2022 features an interview with Professor Paul Johnson, as he describes life-changing results from the DRWF Human Islet Isolation Facility at the Nuffield Department of Surgical Sciences (NDS).