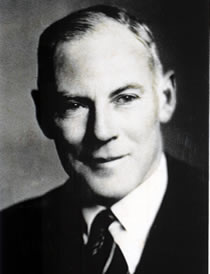 © NDSPirie, South Australia, son of William Cairns, timber contractor from Scotland, and his Australian-born wife Amy Florence, née Bell. He was educated at Riverton High School and at Adelaide High School, where he was dux and editor of the journal in 1911, and proceeded to the university with an exhibition. On 11 May 1915 he joined the Australian Imperial Force as a private in the Australian Army Medical Corps, and from 30 July served in the 3rd Australian General Hospital on Lemnos. Next February he returned to complete his medical course at the University of Adelaide which he represented at rowing and lacrosse. He graduated M.B., B.S. in 1917 after being Davies Thomas and Everard Scholar, was commissioned as captain on 7 August, and elected to the South Australian Rhodes scholarship. From 29 March 1918 he served in France with the 2nd A.G.H., the 3rd A.G.H., the 47th British Division and the 15th Australian Field Ambulance.

Cairns entered Balliol College, Oxford, in January 1919, rowed as bow in the University Boat Race and was president of the Balliol Boat Club. After six months in the Radcliffe Infirmary as house surgeon, he utilized his Rhodes scholarship to begin his long connexion with the London Hospital, first in the pathology institute, then in the surgical unit, becoming F.R.C.S. in 1921, the year of his marriage to Barbara Forster, youngest of the remarkable daughters of A. L. Smith, master of his Oxford college.

At this stage Cairns's special interest was genito-urinary work. As Hunterian Professor of the Royal College in 1926, he lectured on testicle tumours and the congenital cystic kidney. His work was marked by thoroughness rather than brilliance. He was already utterly dependable. The time was ripe, in his view, for the development of neurosurgery at the London Hospital, and in 1926-27 he took leave with a Rockefeller fellowship to study the new speciality under Harvey Cushing at the Peter Brigham Young Institute, Boston, Massachusetts. Under Cushing's abiding inspiration, he learned the surgical technique, the organisation of a clinic and the system of record collection with which he was to endow generations of his pupils. Returning to England in 1927 he had an assured appointment at the London Hospital but life was not at first financially easy. The young man took some time to make his mark since he insisted on specializing in neurological surgery in a manner which seemed unorthodox. His beds were scattered, theatres not easily made available, and nurses and especially radiologists were untrained in the new kind of surgery which was, moreover, unpopular with anaesthetists. (Sir) Geoffrey Jefferson and Professor N. M. Dott were facing similar obstacles and the three men soon created a new school of British neurological surgery of international stature.

Cairns soon became inordinately busy, his consulting work being carried out in the London Hospital, his operating in West End nursing homes. Another visit to Cushing strengthened his resolve to be an integral part of a medical school freed from the consuming distractions and wealth of a busy metropolitan practice. 'Hugo' Cairns was the vital force in persuading Lord Nuffield, who was stunned by his enthusiastically unyielding energy, to make his farsighted benefaction to Oxford medicine. Cairns had by now an international reputation: when T. E. Lawrence was fatally injured on his motorcycle in May 1935, it was 'Mr Cairns, the brain surgeon' who was immediately called to treat him.

Cairns was the inevitable first tenant of the new Nuffield chair of surgery at Oxford in 1937 and he was elected a professorial fellow of Balliol. He left the London clinic in good hands, characteristically taking copies of his case records, clinical photographs and pathological material with him. He was a pioneer in employing a medical artist in his theatres. Doubts about the adequacy of clinical material were soon dispelled, but eighteen creative months with new wards coming to life were interrupted by war, when Cairns at once became adviser on head injuries to the Ministry of Health and neurosurgeon to the army, eventually rising to brigadier. A new base hospital for head injuries was established at St Hugh's College where 'The Nutcrackers Suite' became a neurological unit of first importance. Just as Cairns was swift to stress the advantage of air evacuation of battle casualties, so too was he busy in organising the mobile surgical teams which revolutionized the treatment of wounded in the North African campaigns. Earlier still in the war he had persuaded the army to make crash helmets for dispatch riders compulsory.

Cairns was inevitably active in developing the use and technique of penicillin treatment developed at Oxford by (Lord) Howard Florey, his successor as Rhodes scholar from Adelaide. Having studied the technique of penicillin treatment of pneumococcal meningitis, and tuberculous meningitis with streptomycin, in his last years he became interested in the operation of leucotomy.

He was appointed K.B.E. in 1946. Next year he was elected the first Sims Commonwealth professor appointed by the Royal College and given the honorary M.D. of Adelaide. He was an enthusiastic supporter of the medical research soon to begin in the Australian National University. He travelled widely and in his later years administrative and ambassadorial duties stole time from his clinical work, but he remained to the end first and foremost the 'good doctor'. Every patient became Cairns's personal friend for life. He was always an exacting exemplar, mellowing as he grew older but still fiercely demanding of his pupils as of himself. He played tennis as if his life depended on it; felled or sawed timber at Wytham Woods until his companions were exhausted; snatched holidays at Bamburgh; and listened to music with his own especial raptness. He was the ideal professorial fellow of Balliol, the college he loved; his counsels were all-important.

He faced death stoically when an operation diagnosed cancer. To the end he remained at work, being flown to the pillow of some dying eastern potentate, just as in 1946—a measure of his international repute—he had been flown immediately to attend to the American general, George S. Patton. He was an eagerly scholarly man who produced more than a hundred papers. His own collection of important early French neurological papers was lost by arson in the Cairns library established in his honour at the Radcliffe. He believed himself to be 'very normal', a claim denied by his own very excellence. 'I don't think I'm very clever: I'm quite ordinary really'. What was unique was his personal bravery, his superb stamina, his integrity, and his capacity to brush aside obstacles. He was always looking ahead and was simple in the directness of his plans; people saw through them but found themselves co-operating because of his unique resolution, his charm and his utter dependability. He could not understand the petty, nor could he neglect any detail in 'working up a case', in Cushing's manner. He died in the Radcliffe Infirmary on 18 July 1952 after a singularly happy marriage, leaving a widow, two sons, and two daughters.