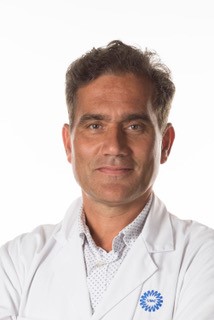 Richard van Hillegersberg attended medical school in Rotterdam, the Netherlands. In 1990 he received a research grant from the Dutch Digestive Foundation, that enabled him to perform PhD research on the local treatment of liver metastases at the Department of Surgery, Erasmus MC in Rotterdam. In 1993 he received his PhD with honor. After obtaining his MD in 1994, he was a resident of Surgery in Rotterdam and was registered as general surgeon in 2000. From 2001-2002 he was a fellow of Surgical Oncology in the Academic Medical Center and Antoni van Leeuwenhoek Netherlands Cancer Center Amsterdam. Since 2003 he is appointed as staff surgeon at the University Medical Center Utrecht. From 2009 he is a full professor of gastrointestinal oncology and program leader of the GI-Oncology department. From 2015-2018 he was board member of the UMC Cancer. From 2015 he is the head of the department of Surgical Oncology of the UMC Utrecht. His clinical interest is upper gastrointestinal tract surgery. Research is focused on minimally invasive and robotic surgery, surgical imaging and genetic profiling. He has authored and co-authored over 10 chapters in textbooks concening robotic forgut surgery and over 380 articles in international peer-reviewed journals. He is past president and founder of the Dutch GI Surgical Association, past board member of the Dutch Surgical Association, past board member of the Dutch Society for liver surgery, past president of the European Digestive Surgery, past Chairman and founder of the Dutch Upper GI Surgery Working Group and member of the permanent Scientific committee OESO World Organisation for Specilised studies on diseases of the esophagus. From 2016 he is chairman of the Comprehensive Cancer Network Utrecht. From 2017 he is the president of Europena Society of Surgery of the Alimentary Tract (ESSAT) and surgical representative in council of the United European Gastroenerology

We are now live streaming the Surgical Grand Rounds

If you have a question for the speaker(s) during the Q&A session, please send it via the NDS Twitter feed using #OxSGR