NDS has to report that Mr Terry G Denton, who was the highly respected administrator of the NDS from 1970 till his retirement in December 1995, has sadly died. Sir Peter J Morris has written his obituary.

Terence Glanville Denton (MA, MSc) known to all as Terry Denton, died peacefully at home on 23 November after a very short illness. Terry was trained as a laboratory technician on the service side of medicine, but decided that research was more interesting and so started in the NDS in the old Radcliffe Infirmary as a Research Assistant in the Nuffield Department of Surgery under the direction of Professor Philip Allison. He moved rapidly up the ranks and became Chief Technician. When I came to Oxford in 1974 to the Nuffield Department of Surgery, Terry was the obvious person to become the Administrator and he remained so until he retired in December 1995.

Terry was a delightful person, courteous and understanding and always helpful. He was Manager, Human Resources, Finance, and problem solver to name just a few of his numerous responsibilities. He only asked me for an assistant when five years from retirement, a position which Mary Saunders occupied for some years. Certainly, from a personal point of view Terry was a marvellous support and absolutely loyal to the NDS and its ambitions. 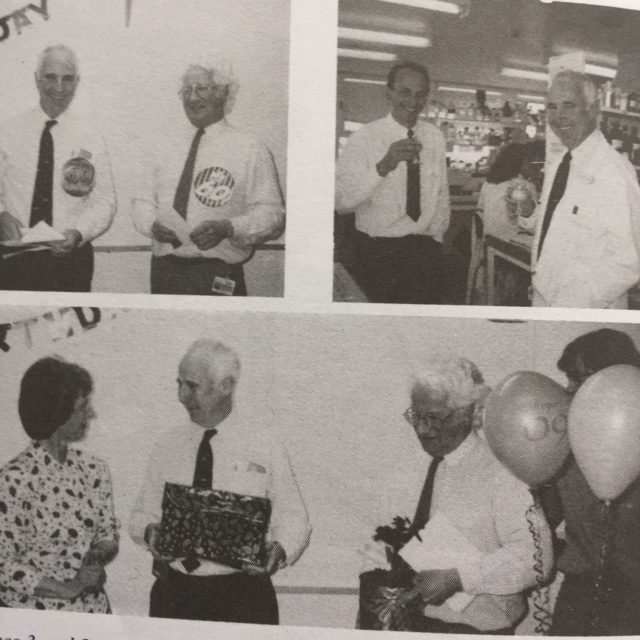 Others have fond memories of him too and, for example, Julian Britton (former Clinical Reader) said “he remembers Terry and Viv (his late wife) with considerable affection and that they were extremely helpful to him and Mona when they moved to the NDS from London both in helping them find accommodation and within the department itself”. He mentions that Viv oversaw Outpatients at the John Radcliffe Hospital and was enormously helpful to him there also. Kathryn Wood (Emeritus Professor of Immunology) writes from overseas that “she has very fond memories of Terry” and Mike Kettlewell (former Clinical Reader) says “what a nice man he was”. Similar expressions of respect have been made by many former NDS members.

Vivienne and Terry Denton were typical of people working in the NHS and the University at the time, namely loyal and long serving. Personally, I had another close link to Terry in that our birthdays were on the same day and we were the same age! Thus, each year the NDS arranged a birthday afternoon tea with a nominal number of candles, certainly after we had both passed 50, but we had a big celebration when we both hit the big 60 (see picture above).

Terry loved music and was an accomplished organist. Indeed, when the NDS was hosting an international meeting in 1979 of the British, American and European Surgical Research Societies the opening by the Vice Chancellor, Rex Richardson, took place in the Sheldonian Theatre and Terry played the organ for the ceremony and the procession.

What a great contributor to the NDS Terry was over so many years and we shall be ever grateful!

We're delighted to announce that we have been successful in the renewal of our Athena Swan Silver Award, recognising our work in advancing gender equality.

NDS takes part in IF Oxford Science and Ideas Festival

The Nuffield Department of Surgical Sciences (NDS) were thrilled to part in this year's IF Oxford Science + Ideas Festival.

A number of staff from the Nuffield Department of Surgical Sciences (NDS) have been honoured at an annual awards ceremony.

The University of Oxford has announced the promotion to Associate Professor of two senior academics at the Nuffield Department of Surgical Sciences.

A new issue of the Journal of the Nuffield Department of Surgical Sciences (JNDS) has been published.

The latest issue of the Journal of the Nuffield Department of Surgical Sciences (JNDS) is now available to read.

Keeva Heap, who is undertaking a communications work experience placement at the Nuffield Department of Surgical Sciences (NDS), shares our words of kindness In honour of Anti-Bullying Week.

My virtual work experience with NDS and NDORMS