In addition to providing funding for MASC to centrally coordinate the trial, each country involved in the Trial is applying for specific funding to run their own sites. Funding to run MelMarT-II in the UK was obtained through a grant from the NIHR HTA programme.

The study chairs are Professor Marc Moncrieff in the UK and Professor Michael Henderson in Australia; as well as three other lead investigators also based in Australia. MelMarT-II aims to recruit 2,998 patients globally; 750 of which will be recruited in the UK.

The MelMarT-II is currently open to recruitment at seven UK sites, with a further 13 sites in set-up.

Melanoma accounts for the great majority of skin cancer deaths in the UK. Since the 1990s the diagnosis of melanoma has more than doubled. According to World Health Organisation statistics, the UK has one of the highest death rates from skin cancer in the world. In contrast to most other cancers, melanoma tends to affect much younger people, with nearly half the patients diagnosed at

Melanoma has a tendency for recurring around the original biopsy site in a very aggressive manner, making it a very challenging problem to treat when it occurs. To prevent local recurrence, the standard treatment has been to take a further safety margin of normal skin and soft tissue around the original melanoma biopsy site. This treatment is offered to every patient diagnosed with melanoma. Surprisingly, this margin of safety has yet to be standardised for melanoma, with a significant variety of excision margins being recommended (from 1 cm to 3 cm depending on the initial stage of the disease) in different countries.

Since melanoma commonly occurs on the head and neck region or on the limbs, the cosmetic and functional implications for patients with such large defects are substantial. The rate of local recurrence for melanoma is quite low (2-8%) and, despite several large clinical trials, there is little evidence that performing such wide excisions changes recurrence rates or improves survival for our patients. Given that the overall 10-year survival for melanoma is now 90% internationally, with approximately 150,000 people in the UK currently living with the diagnosis, this has become a key survivorship issue for these patients. Accordingly, a clinical trial has been recommended by the international surgical community to test the safety of narrower surgical margins and to improve patients’ quality of life after surgery.

MelMarT-II is a simple randomised clinical trial. Patients from British and Australian melanoma charities helped to develop this trial. This study is designed to be able to prove or disprove that a 1 cm excision margin is just as safe as a 2 cm margin for high-risk melanoma of the skin. This study is designed to show that the risk of long-term pain associated with surgery can be halved and quality of life can be improved with a 1 cm margin due to reduced side effects and need for reconstructive surgery after treatment. This trial will also evaluate the economic impact of safely using less surgery for the NHS and society in general. It is expected that this study will define the surgical treatment world-wide for all high-risk melanoma patients.

Australian collaborators have been successfully awarded a major grant (AUD $2.76M) to manage this trial, and to recruit in Australia. Funding secured from NIHR gives UK patients the opportunity to contribute to this truly international collaboration. This trial is very relevant to the UK population - 1 in 4 of all patients with invasive melanomas will be affected by the outcome. The financial implications for future treatment in the NHS are significant. The centralised nature of cancer care in the NHS is perfectly positioned for the UK to make a leading contribution to this study, and we aim to recruit about 30% of the total needed. Other countries, such as Canada, Sweden and USA have also been awarded similar grants nationally to participate in this trial. 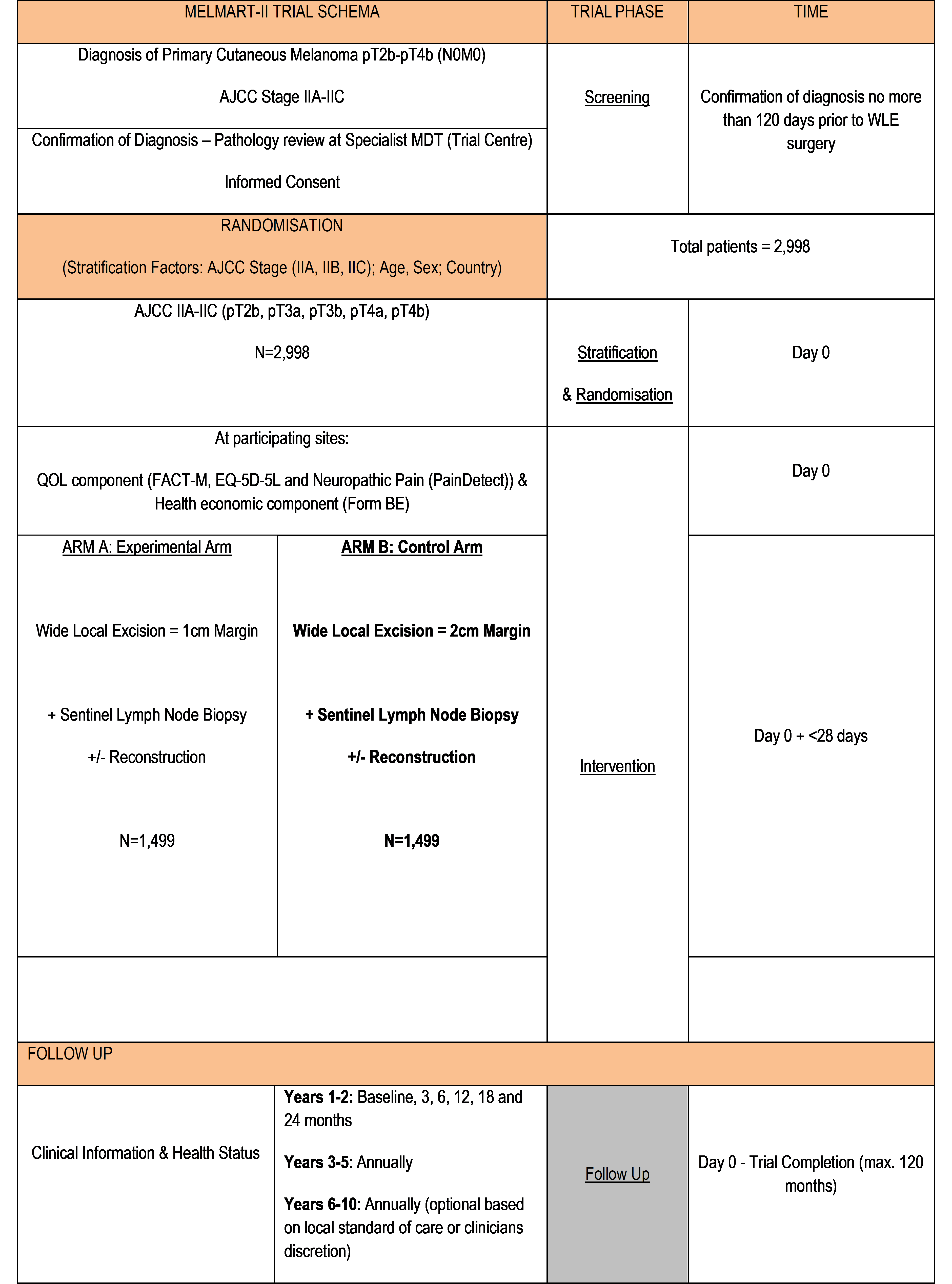 Want to learn more? To contact the MelMarT-II Trial team, please send an email to melmart2@nds.ox.ac.uk.

We are pleased to have a partnership with Melanoma UK.

Gillian Nuttall is CEO and founder of Melanoma UK, which is currently the most active melanoma charity, particularly on the social media platforms.

Melanoma UK has been participating in NICE and SMC appraisal for ten years. In addition to clinical trials, Melanoma UK designed the "My Melanoma" app which allows patients, amongst many other things, to submit quality of life data to researchers via their own smartphones/tablets.

Listen to a webinar, hosted by Melanoma UK, which provides more information about being involved in clinical trials: Demystifying Clinical Trials and Patient Involvement.