On Friday 29 September, NDS took part in a festival of curiosity exploring the world of research across the University of Oxford's museums, libraries and gardens.

Curiosity Carnival – Oxford’s European Researchers’ Night – was the largest public engagement event the University has ever staged. 9,400 people attended the event on the night and engaged with 493 researchers, DPhil students and academics from over 60 different departments and faculties across the University.

Situated in the Museum of Natural History, researchers from NDS shared with the public some of the exciting technology that we use within the department.

Dr Sarah Cross and Ms Rebecca Spiers chatted with many visitors of all ages about pancreatic islet isolation and transplantation, focussing on the innovations in beta-cell replacement therapy that over the last 50 years have enabled islet transplantation to become an effective, minimally invasive treatment option for people with type 1 diabetes.

Meanwhile, Consultant Neurosurgeon Mr James FitzGerald showed the technology used in the treatment of neuropathic pain. Visitors discovered how dorsal root ganglion stimulation works directly in the area where the pain signals are coming from and can be used to help reduce the effects of problems such as post-amputation pain and pain disorders, including complex regional pain syndrome and failed back surgery syndrome. 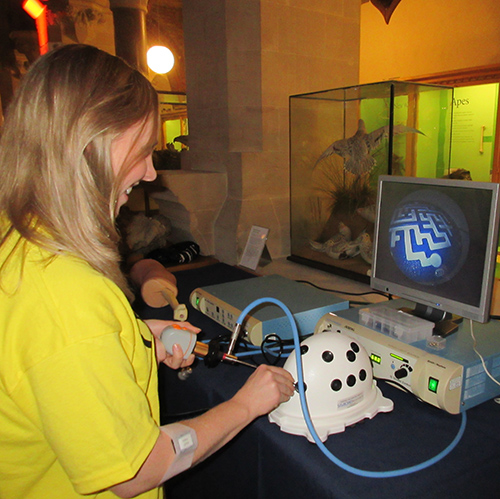 © NDSNDS was delighted to be joined by McLaren Applied Technologies. They have designed a system called WASP that utilises sensors, which are strapped to the arms of surgeons, to measure movement and thereby indicate to the surgeons how well they have performed a particular procedure, using metrics such as the number of hand movements and the smoothness of their movement. There was much interest in the system as many tried their hand at being a surgeon.

A gallery of photos from the event can be found here.

Congratulations to Dr Matthew Bottomley, who has been announced as the joint winner of the Stewart Cameron Science Award by the Royal Society of Medicine (RSM).

NDS takes part in IF Oxford Science and Ideas Festival

The Nuffield Department of Surgical Sciences (NDS) were thrilled to part in this year's IF Oxford Science + Ideas Festival.

Thirty-three University of Oxford researchers have been named Turing Fellows for the 2021/22 academic year, including Associate Professor Clare Verrill from the Nuffield Department of Surgical Sciences (NDS).

Researchers at Oxford University have received a prestigious Wellcome Innovator Grant for investigating the role of the pedunculopontine nucleus (PPN) – a brainstem nucleus – in human consciousness.

Nearly 40,000 men are diagnosed with prostate cancer each year in the UK. Perhaps the most significant clinical challenge today is deciding which type of treatment will work best for different patient groups.

The University of Oxford has announced the promotion to Associate Professor of two senior academics at the Nuffield Department of Surgical Sciences.

Keeva Heap, who is undertaking a communications work experience placement at the Nuffield Department of Surgical Sciences (NDS), shares our words of kindness In honour of Anti-Bullying Week.

My virtual work experience with NDS and NDORMS

To celebrate 100 years since women were admitted as full members of the University and on the occasion of International Women's Day, a group of inspirational women in the Nuffield Department of Surgical Sciences (NDS) reflect on their journeys, their place in Medical Sciences and their vision for the next 100 years.

The life of a research nurse: supporting the Oxford COVID-19 Vaccine Trial

Research nurses in the NHS are playing a crucial role in helping to trial new coronavirus treatments and vaccines. Three NDS research nurses stepped up to help with the fight against this new disease. Here Bhumika Patel shares her experience of working on the Oxford COVID-19 Vaccine Trial.